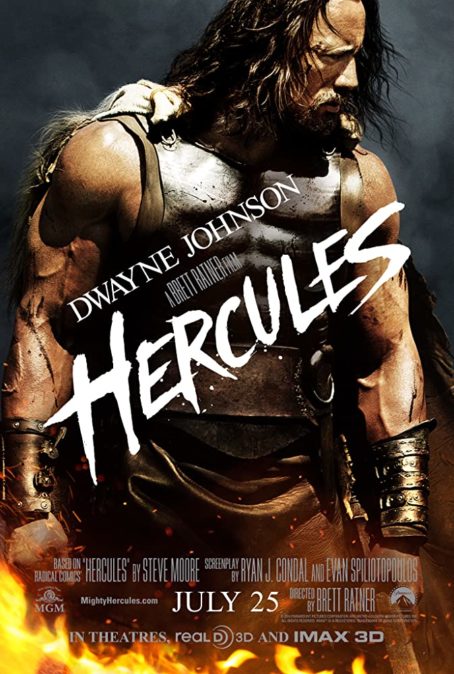 Film Review – Hercules. The following is a totally independent and unbiased review of the 2014 film, “Hercules”, by Chris Pennington.

This is an older film now, and one until recently I did not know existed. I came about it whilst researching about a particular subject for my new novel, so I was excited to give it a go.

It boasts a good cast – Dwayne “The Rock” Johnson, Rebecca Ferguson, Ian McShane, Rufus Sewell and John Hurt to name a few. Good start, this should be a great movie with that cast, shouldn’t it?

Well, kind of. It is certainly worth a watch, and it has several good fight scenes – in particular, the one where they are ambushed by the creepy half-naked people who have delightfully feigned death on the scene of a battle.

However, if – like me – you are expecting a film about the fabled twelve labours of Hercules, you will not get that from this film. The movie is (I think) a pure work of fiction, set well after Hercules has made his name and is now more of a bounty-hunter, using his muscles and talents to make a few gold pieces on the side.

When a malevolent warlord threatens to thrust the kingdom of Thrace into chaos, its desperate ruler, Lord Cotys (Sir John Hurt), and his daughter, Ergenia (Rebecca Ferguson), turn to Hercules (Dwayne Johnson) to restore the peace. In order to succeed, Hercules must once again summon the strength and valor that once made him a myth among men.

I could not help but be slightly disappointed that the film did not include more of what I was expecting, ie. the labours of Hercules. But that I suppose was my fault for not checking beforehand, and cannot be used to degrade the film itself, which is a decent, swashbuckling adventure. Just what one would expect from a Dwayne Johnson film.

Look out for further film reviews in the blog section